On November 16th, Louis Riel Day, I was humbled and honoured by Queen's.


Mr. Chancellor, by the authority of the Senate, I have the pleasure to present to you, that at your hands he may receive the degree of Doctor of Laws honoris causa

Distinguished author and educator, Métis raconteur, and activist; Prolific artist and pedagogue, authoring more than seventy children’s and cultural books;
Graduate of the University of Regina;

An inspiring mentor whose love of language and learning allowed him to meet the challenge of dyslexia head on, achieving success as a teacher and school administrator, whose understanding of the unique challenges faced by Aboriginal, second language and special needs learners have made him an empathetic and effective guide for those striving to become literate;

Embracing the gift from his great-grandmother to become an enthusiastic champion of traditional storytelling, whose own visually evocative style of writing provides a powerful reflection of authenticity in Indigenous knowledge and culture;

Noted chronicler in English, French, as well as thirteen of Canada’s Indigenous languages, whose body of work in all its iterations constitutes a veritable ‘Rosetta Stone’ for many of our oldest lexical traditions;

Whose search to uncover the story of his own true self has inspired a quest to give voice to those who have long stood in the periphery;

An engaging speaker whose passion and humanity challenges all of us to see the potential of Indigenous peoples, while encouraging young Aboriginal people to recognize it in themselves;

Whose commitment to share with others never wavers so long as there are people eager to listen and learn, and whose lectures conclude only after the last curious soul has left satisfied;

The recipient of numerous national and international literary accolades, including the Governor General’s Literary Award, and the Silver Birch Award, and whose iconic work “If You’re Not From The Prairie” has been included in Macleans’ Magazine’s list of the top twenty children’s books in the history of Canada.

Member of the Order of Canada, Board Director of the Métis Federation of Canada, namesake and inspiration for the David Bouchard Public School in Oshawa, Ontario;

A remarkable individual whom we are delighted to welcome to Queen’s, paying tribute to his accomplishments with our highest award. 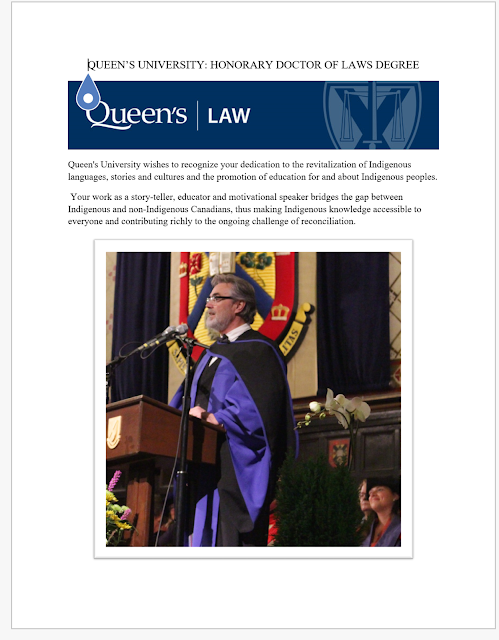 Posted by David Bouchard at 3:56 PM