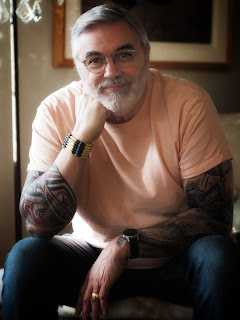 My Great Grandmother was a nun.

After giving birth to 14 children and her husband dying, the Catholic Archbishop granted my GGrandmother special permission to become a nun in the cloistered order of the Sisters of the Precious Blood in Gravelbourg, Saskatchewan. It sounds crazy but it happened. My GGrandmother was a nun.

I knew her well. As a child, I often went to the Precious Blood to purchase sheets of hosts, sheets from which hosts are cut for communion. My friends and I loved the taste of this flat bread.

The only way I ever saw my GGrandmother was through grilled barriers, somewhat like a latticed fence. The monastery was cloistered. It was she who introduced me to the idea that we were Metis.  Her smooth, round fingers would reach through the lattice, touch my cheeks and she would say,  "Mon beau petit Metis!" "My sweet Metis boy!"
.
My GGrandmother's mother was Jeanne Beaudoin, nee Charbonneau. She was buried in Kranzburg, South Dakota. Her parents were Pierre Charbonneau, Ojibway and Josette Bonneterre, Osage.


Of this there is no question. We have every document necessary that show where they lived, where they were married and where they died. I know their names. I know their Nations. I am of them. I am Metis. And be clear in this; I didn't seek them out for personal gain or for membership in a Metis organization. I simply wanted to know. And when I came to know, my life changed. 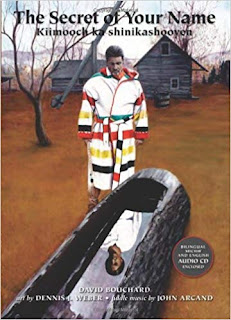 I knew Odille Allard but I didn't know her mother or her Grandmother. The voyage I took in getting to know them was amazing!  Expensive but worth it. Years to achieve but worth it.

Twenty years ago, I went to our local Metis Nation of Greater Victoria. There, I was introduced to Stan Hulme, a wonderful man and the volunteer genealogist who helped the MNGV. Stan did some research for me and came up with what he thought would qualify me for citizenship in the British Columbia Metis Nation. It didn't. We added to his research but that didn't suffice either. The BCMN needed more. I learned that citizenship requires direct, legal documents for every link leading to Native ancestors.

The first thing I did was to put the name of my GGrandmother, Odille Allard out on the internet asking if anyone knew her. I received a reply from Don Presser Jr., an accountant in Alaska. Don was her great nephew. Don kindly sent me a document showing that our mutual ancestor was an Algonquin woman who twice appears on the Quebec census as Marie Louise Manitookookoo (Sauvage), He also suggested that I contact a professional genealogist in Green Bay, Wisconsin. I did exactly that and Kris Matthies began what was to become years of research. 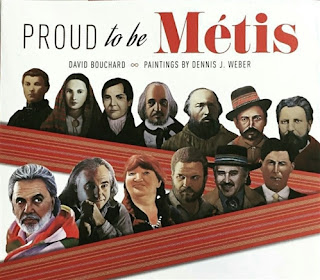 Kris found legal documents for every person in my ancestry. The process was time consuming and costly as the time it takes to find death/birth/marriage/baptismal certificates is substantial. Churches burn. Government offices close. Costly.

After seven years, Kris had everything needed to show my lines back five generations. I knew the details of three generations back but I now had five.

My GGrandmother was Metis. By today's laws, she could have been a status First Nations woman but back then, they didn't care to count themselves either FN or Metis.

It should be noted that back then, Metis people did not want First Nation status, in fact they tried to conceal their bloodline and they worked to fit into mainstream society. The ramifications of the North West Resistance and the open racism toward Indigenous people had those who could, hide. My GGrandfather Narcisse Beaudoin's tombstone reads Nelson Bowdwine. He changed his name to try to sound/look English and thus white. He likely couldn't even pronounce the name.

The next and final stage of my voyage was to ask Kris to plot out a trip that Vicki, Victoria and I would make, a trip to the homelands of these amazing people.

We flew to Winnipeg, rented a car and drove to Kranzburg, South Dakota. There, we found the resting place of my GGGrandmother, Jeanne Beaudoin/nee Charbonneau. Victoria and I offered tobacco and played our honour song for her.

We then drove across the Northern US, the same trip that our ancestors made, back to Bay Settlement in Wisconsin. As Kris predicted, we were unable to find Pierre Charbonneau or Josette Bonneterre's resting places but we did find the church in which they were married. And of course, we visited the towns and churches that Kris suggested we visit, that included the church where Odille was married. Can you imagine the pleasure that brought to me? I am French, Ojibway and Osage and I am Proud to be Metis.

I could obviously go on and on as I love speaking of them. Yes, I have written two books to honour them, The Secret of Your Name and Proud to be Metis.

Finally, allow me to share a couple pieces that speak to my journey and the pride I have in my ancestors and in my being Metis. 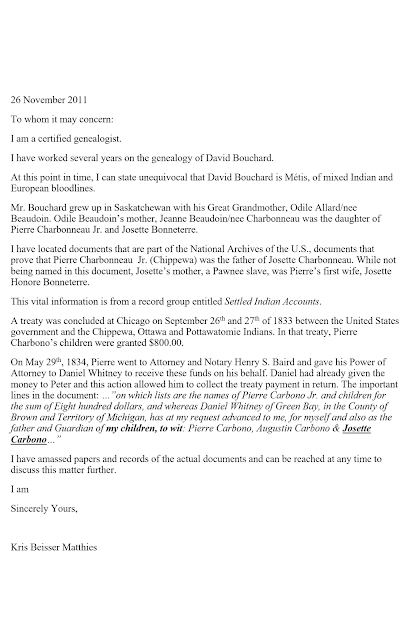 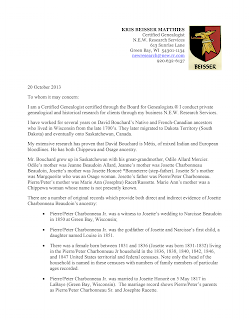 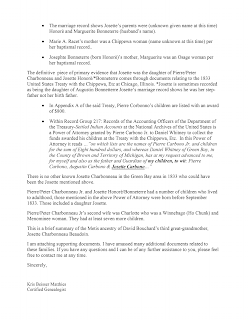