...Sincere thanks to the Valley Sentinel for this lovely article! It was a real pleasure spending time with Daniel and Andrea prior to our lovely community event! ...David 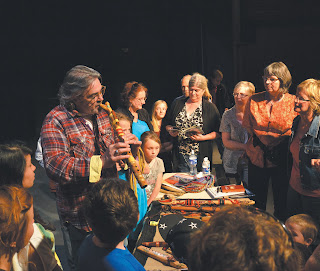 On Tuesday June 21, David Bouchard plays one of his many flutes for a crowd that gathered after the end of his two-hour presentation to listen to more of his songs and stories. Bouchard performed in the Valemount Community Theatre at Valemount Secondary School to an attentive audience following an outdoor potluck dinner. Bouchard’s Métis spirit name is Zhiibaayaanaakwad which means roughly…”“Eagle who flies in and out of the clouds bringing messages from Creator”.

A bright warm sun broke through the clouds when famous Métis author and Order of Canada recipient, David Bouchard, arrived in our Valley on June 21, which also happened to be Aboriginal Day across Canada.

Outside Valemount Secondary School (VSS), many Valley residents gathered to enjoy a community potluck with David Bouchard. An authentic teepee had been set up and enjoyed by the children who attended. “I expected more mosquitoes, “ Bouchard joked when opening his evening presentation, held at the Community Theatre at VSS. Moments earlier, as the audience was seating themselves, beautiful melodies filled the theatre as Bouchard expertly played one of his many flutes.

It had been a long road that led Bouchard to our community theatre on Aboriginal Day. “This year alone, since the first of February, I’ve travelled 62,000 miles. In the last 11 years it’s for sure been a million miles,” Bouchard told The Valley Sentinel, speaking to us before the show. Bouchard told us that he has likely been snowed-in in every remote community in Canada, including with a “big white ugly cook” in Natuashish in northern Labrador. “I’ve met a lot of interesting people and learned a lot of interesting stories,” Bouchard said of his many travels. “The most significant thing I’m doing in my life is what I’m doing now,” Bouchard declared. He said it took him 25 years to learn to become a better father and teacher. It started with him progressively watching his own son’s struggle and coming to realize the importance of reading. “My sons don’t read because I wasn’t a good father, I just didn’t know,” Bouchard explained. He quoted famous author Maya Angelou who said, “Parents who know better, do better.” He said he realized the power he has to make change happen and decided to use that power as a school principal.

Part one of his destiny was realized. Part two of Bouchard’s journey came with the realization of his Métis ancestry. “It dawned on me that maybe I was put here for a reason, maybe my Grandmothers were waiting for the time to be right for me to be mature enough, to be ripe enough, to guide me,” Bouchard said. He believes that the reason Aboriginal people are not readers is because they don’t see themselves in books. “The good news is anything can change,” Bouchard said. Bouchard noted such famous aboriginal authors as Joseph Boyden, who won the 2008 Giller Prize for Three Day Road and Drew Hayden Taylor, the Ojibway writer of Motorcycles & Sweetgrass.

“I have a mission to write cultural books that will be of interest to all ages and I am trying to include as many nations as I can,” Bouchard declares. Bouchard explained that he changed to a publisher who agreed to print his books in native languages. “My dream is to get books in as many of our languages as I can, there are at least 62 living languages in our country,” Bouchard explained. Bouchard has authored 52 books. “I have... maybe 10 in the fire,” said Bouchard.

Bouchard’s presentation held the audience spellbound for its two-hour length during which he demonstrated the different melodies his various flutes made, demonstrated to the children of the audience the importance of reading through the telling of stories and explained the key to becoming good reader.

“To become a reader, find one book you like and then one more and one more. That is why I like series like Harry Potter and Twilight,” Bouchard told the audience.

Even when the presentation ended many members of the audience joined Bouchard on stage to speak with him personally, learn more of his beautiful flutes and to perhaps squeeze just a little more knowledge from such a wise man. Particularly obvious was the ease the children had speaking and interacting with Bouchard.

Local First Nation Elder, Mae Frye, was impressed with the presentation. “I really enjoyed the show, especially the attention he gave to the kids, and how he encouraged them to read more books and watch less television. I think that was my highlight. He is a very good storyteller. Storytelling, I think, is very important,” said Frye.


“Man with a Mission”

David Bouchard discusses the struggles Métis children have in learning to read.
Photos by Andrea Scholz
Posted by David Bouchard at 3:08 PM No comments:

School's out for summer...

My spring tour is over. It was amazing! In the past three months alone, I have travelled 70,000 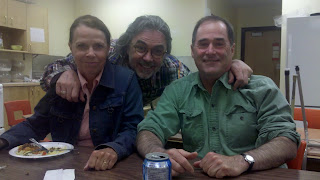 miles and made hundreds of new friends. In spite of those miles, hotels and restaurants, I'm feeling strong and healthy.

I spent a good part of June in the Rocky Mountains. In Pincher Creek, I worked with my Blackfoot friends and was able to catch up with my old friends Tyler and Judy Trafford. Tyler is the author of one of my favourite series ever: Sun on the Mountains.
In Valemount, I was hosted by my old friend Claude Germain. I stayed in Moose Cottage at

Teepee Meadows. The mountains don't get any prettier and the mountain men don't get any sweeter!
I now have a few weeks to spend at home, catching up. I hope to get two of my new books wrapped up and printed by the fall. Red Deer also has my book Rainbow Crow ready to go. It could/should be out by September or October.
Catching up on my writings, walking my dogs, resting and getting reacquainted with my family... I started my home time by going to my dad's doctor for a three way chat..a talk about drugs, pain, sleep and all those vital things in the life of a 93 year old. The amazing part of this story is that dad is in great shape. He walks a ton. He drives too much.

He cares for my mom, his dog and anyone who needs caring for. My dad has set the bar terribly high...as shown in this picture. As I write, my dad is calling me with updates on the NHL draft and the Blue Jays playing in the ninth.
Life doesn't get any better. I wish this kind of happiness for all...
Posted by David Bouchard at 8:38 PM No comments:

Once again, I've been high and low, east and 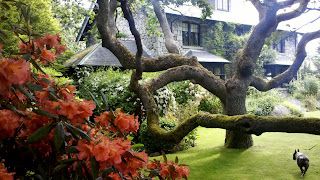 west...urban and rural...reserve to downtown metropolis Canada!
And now, I have two short trips before coming home for the summer...and home is a most magical place! This morning, Vicki and I shared a coffee as we walked Royal Dude and Louis Riel (seen in this picture) in our garden.
Travelling...making new friends... seeing new sights...and making a difference in the lives of communities, families and so many wonderful people! Can it get any better?
Posted by David Bouchard at 8:35 PM No comments:

For my new friends - for WILU members with whom I had the privilege of spending yesterday… (http://www2.uregina.ca/wilu2011/) 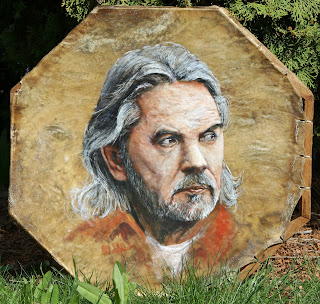 Thank you for your kind and wonderful reception. I’d like to tell you that all my audiences are as warm and passionate about my message as you were but it isn’t so.

You are wonderful - a national treasure. Miigwetch/marcee/thank you.

This is the list I promised you – the books I spoke about during my workshop.

Books by Aboriginal writers…that include aboriginal readers - the few that I was able to speak to in our short time together:

1. Joseph Boyden’s Three Day Road and his Through Black Spruce
2. Richard Wagamese’s One Native Life, For Joshua, Keeper ‘n Me, and my favourite Ragged Company
3. Drew Hayden Taylor’s Motorcycles and Sweetgrass, his Me Funny and Me Sexy.
4. Joseph Bruchac’s….plethora of excellent books.
5. Joseph Marshall III's One Hundred in the Hand
6. Picture book by Dale Auger…Mwakwa – Talks to the Loon
7. Picture books by Richard Van Camp and George Littlechild
8. Picture books by C.J. Taylor
9. Picture book by Maxine Trottier
10. Picture/cultural books that I have written

Books that include aboriginal readers…
1. Alfred Silver’s The Red River Story
2. Tyler Trafford’s Sun on the Mountains (trilogy)
3. John Vaillant’s The Golden Spruce (I spoke of Tiger as well)
4. Paul Peel’s Autobiography
5. Sacajawea by Anna Lea Waldo
6. Guy Vanderhaeghe’s The Englishman’s Boy and The Last Crossing
7. Gear and Gear’s multitude of books…I spoke to their newest Coming of the Storm and the their YA Children of the Dawnland.
8. Jean Auld’s Clan of the Cave Bear series
9. Win Blevins’ Stone Song and his Rock Child
10. The Diary of John Jewitt
11. Michelle Paver’s Chronicles of Darkness
12. Manda Scott’s Boudica
13. Thomas Berger’s Little Big Man

During my keynote, I read from Richard Jorgensen's Reading with Dad

That's it... I home safe and sound...without the iPad I thought I might have landed at the U of R. Darn ...Group hug -
Posted by David Bouchard at 8:33 PM No comments: