If you're not from  the Prairie

For me, it started with If You're not from the Prairie. I won't speak to the successes and opportunities this book has afforded me only to say that it was on McLean's list of the top 20 children's books in the history of Canada, along with Love you Forever and The Hockey Sweater. I don't know the exact sales number today but at last count, it was over 400,000 copies. I know. Crazy!

I had never planned on being a writer let alone a public speaker (although my schoolmates will accuse me of being somewhat of a ham). Nevertheless, this is where life has taken me and it started with If You're not from the Prairie. 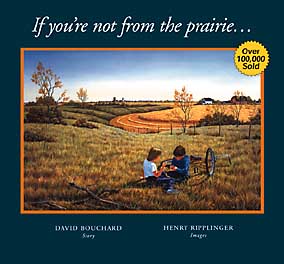 Thirty years after it's release, I still get tons of responses and accolades. I'd like to share two recent experiences with you.

A month ago, Canada's respected Metis Elder George Goulet reached out to me saying that he would like to purchase a copy of If You're not from the Prairie. As if! As if I would take money from a man who along with his amazing wife Terry has given so much to Metis people. I autographed and sent George a copy.
This week, I received the following:

"Your generosity in sending us a copy of your wonderful book is only exceeded by your thoughtfulness in doing so.

The evocative verbal images your poetic narrative displayed read like a prairie poem. The images of prairie scenes drawn by Henry Ripplinger reminded George of going to visit his grandfather at his farm in Prairie Grove, Manitoba, about twenty-five miles from Winnipeg, when George was little more than a toddler.

You and George are both Prairie-born Metis and our early childhood is something to cherish.
Our hearts were warmed by both you and the book. Thank you so much.

Your Friends, George and Terry."

During the same week, I received this email from an old friend - old in that Colette is retiring and old in that we became friends over thirty years ago.

You may remember the sister book my kids wrote (circa 1987-90) in response to If You're Not from the North  in preparation for your visit to Rossville School Norway House, Mb. during one of our Writers' Festivals.

Several years later, I attended a talk you gave for teachers in River East Transcona S.D.. I almost feel off my chair when you pulled out the ragged blue duo tang containing my kids' response poem!!! all those years later.

Today, I speak in front of the staff, as I am retiring from teaching. I have been asked to speak on the highlight(s) of my career.  So, please add, to the many accolades you have received, one more - Most Memorable Highlight of Colette Wallace's Teaching Career.

Keep writing for your people,Colette Wallace

I will NOT leave you in the lurch. Here is a short taste of the amazing gift Colette and her kids gave me all those years ago..

In If You're not from the Prairie, I wrote...

If You're not from the Prairie, you can't know me...you just can't know me. You see...my hair's mostly wind, my eyes filled with grit, my skin's white then brown, my lips chapped and  split...I've lain on the prairie and heard grasses sigh. I've stared at the vast open bown in the sky. I've seen all those castles and faces in clouds. My home is the prairie and for that I am proud. If You've not from the Prairie...

Posted by David Bouchard at 1:23 PM