I honestly don't know what role Leprechaun plays in Irish culture, but like most, I have heard it said that Leprechaun sits at the foot of the rainbow with a pot of gold. It was that that got me to thinking.

I had just recently returned ftom a trip to the Arctic filled with stories and dreams.

One of the most exhilerating experieces I had had was being in the front row watching the spectacular show of the Aurora Borealis - the Northern Lights.

Like many, I listened and I dreamed. I heard stories and I let my imagination run wild. When it was over and done: Raven's Great Light Show.


Next came a partner/an illustrator. Keep in mind that most of my partners are not illustrators but fine artists. What I needed was one whose work perfectly typified the Northern Lights. Enter Jasyn Lucas: 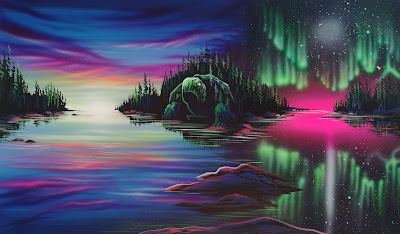 I reached out to this amazing Oji-Cree from Thompson, Manitoba. Illustrating a book would be new to Jasyn but he was all in. The rest is history...

Thank you Vidacom Publication https://www.vidacom.ca/ for producing such a beautiful book. 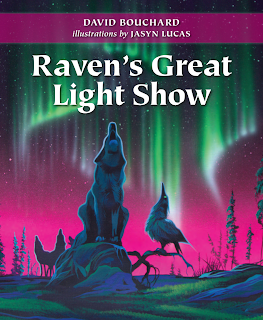 Posted by David Bouchard at 1:49 PM