My Dad's 96th birthday falls in the middle of my busiest season. At this time of the year, I am always on the road sharing the gift of reading and culture. Conferences, schools, PAC meeting - I'm almost everywhere but home. This week however, my friend/agent Chris booked me at home to be near my dad.

In 1917, my dad, Wilbrod Bouchard, was born in Beauchamp, Sask. Beauchamp was a small Metis community in Northeastern Saskatchewan. The Catholic Church did as it so often did...they built a church in St. Front allowing our French speaking Metis families to move into a new situation that would allow them to think of themselves as French and not Metis. For a time, it worked but as with all things...life moves in circles. I found out. Others found out. The Metis of Willow Bunch figured it out. Communities across our Prairie are coming to see themselves for what they are; Metis.

Dad grew up in St. Front. He farmed and joined the army at 24. He was a military policeman for the Royal 22 Regiment. He met mom after the war. They were married...then gave birth to Diane in 1949 and me in 1952.

Dad and mom sold the farm in 1954 because of flooding. They took what they had, moved to Swift Current to learn how to cut hair. They were hair dressers in Gravelbourg, Sask. from 1955 to 1967, allowing me to study at College Mathieu. They moved to Regina in 1967 where dad bought Western Patrol Security.

When I moved to West Vancouver in 1969, Diane and Ken followed with mom and dad in tow. My family settled in Sidney while I worked as a school administrator in West Van. Vicki and I moved to Victoria in 2000 when I began writing and touring full time.

Mom passed in 2011. Dad moved into the beautiful facility at Broadmead Lodge and on Wednesda, we celebrated his 96th birthday.

My sister and I have been blessed with two wonderful human beings for all these long, wonderful years. 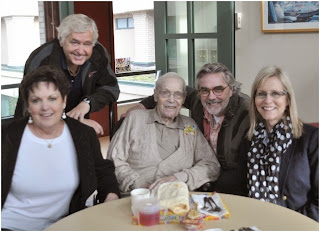