Hundreds of thousands, through my conference work, have heard me say that Holly Claus is my favourite Christmas book ever.

Hundreds of thousands have heard me say that Holly Claus is the Harry Potter of Christmas - a book that every family should have read...should have in their library to read and re-read at this time of the year.

If you have not experienced the magic of Brittney Ryan's New York Times best selling Holly Claus, consider this my gift to you.

Imagine a place in time where Santa would receive a letter from a boy asking what he, Santa, would like for Christmas. What if that letter contained the magic that would allow Santa and his wife Vivianna to finally have the child they have dreamed about for centuries. What would they name their child and how would the Christmas Princess deal with the curse that followed her into the land of the Immortals...the land of Forever...???


Canada... Holly Claus is a book for young and old alike. I first shared it with our daughter Victoria when she was six. I last shared it with her...last night... My 14 year old will tell you that her childhood was highlighted by two books - Harry Potter and Holly Claus.

When I asked if she had not outgrown these two classics, she simply answered;

"Dad, I haven't outgrown Harry and Holly. I grew up with them." 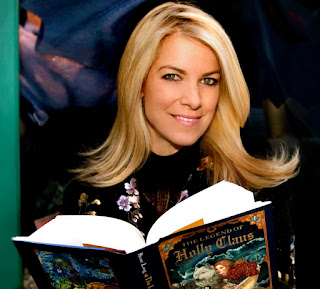 Posted by David Bouchard at 8:45 AM